THE EVOLUTION OF SYSCOIN PROTOCOL: SYSCOIN 4.0 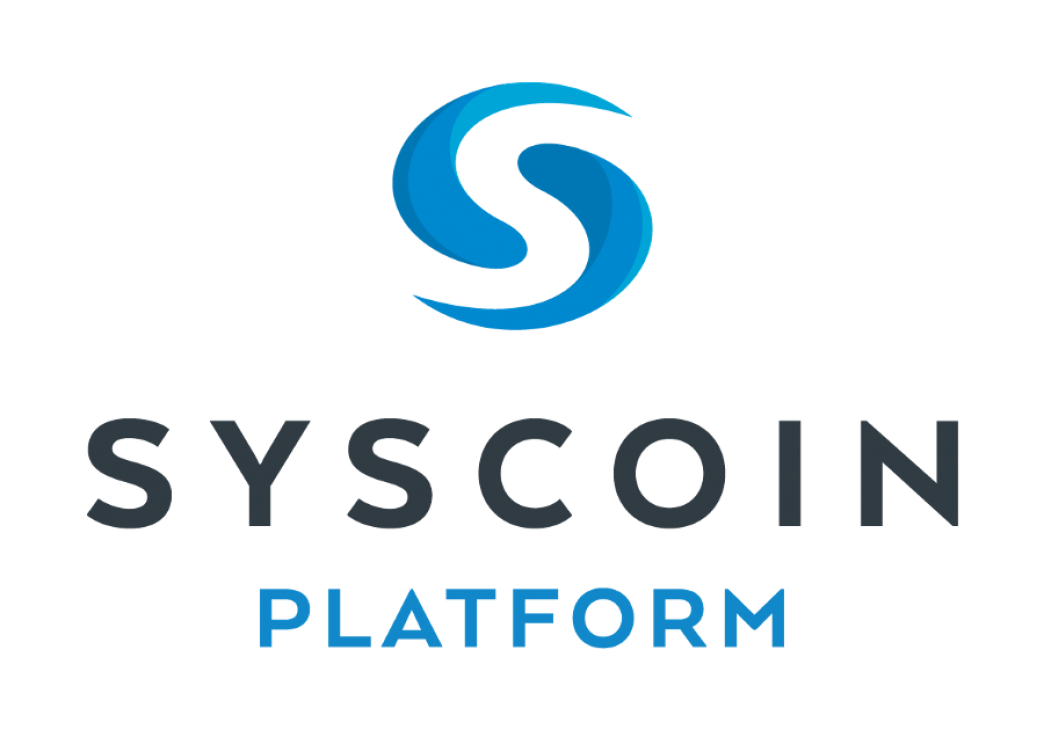 The Evolution of Syscoin

Syscoin is developed as a protocol that enables a set of business components rooted on the blockchain. Organizations can leverage the value proposition offered by the cutting edge distributed ledger technology of Syscoin via an easy to use API.

Initially, from Syscoin 2, these services comprised of:

As time went on, developers discovered how to better leverage distributed ledger technology and through continuous research were able to optimize various features — or replace them with better implementations.

A lot has been learned in the space over the years from clients and users alike. Non-value transactions such as aliases, offers, escrow and certificates are not ideal in their existing form from the perspective of horizontal scalability for real world mass adoption. This is due to the following reasons:

Firstly, storing such data ‘on-chain’ is inefficient, creating unnecessary ‘bloat’. Realistically, this also made it clumsy to work with as a user, when compared to centralized equivalents. Even with optimization strategies such as pruning this is non-ideal from a data perspective and difficult for users to utilize effectively to create value.

Secondly, these services are not economically geared towards incentivizing development which is key to catalysing a successful decentralized ecosystem.

The marketplace can provide an example; in order for it to be successful, the model should incentivize the development community to create additional channels to access marketplace functionality — increasing it’s accessibility and traction as a whole.

In order to incentivize this activity, marketplace users should directly correlate to some increased value for the actors supporting this use case. Running a website, writing code, hosting servers etc, all have real costs and the incentive for developers should outweigh these costs.

Many in the community think simple ‘use’ of the current marketplace features will result in fees for masternodes and miners that create this incentive. The reality is that the scale of the marketplace use required to drive up fees to a level where they provide reasonable incentive in the current system is extremely difficult to achieve.

Fees only increase if blocks get full (bitcoin model). Listing an offer utilizes about 1 kB of data on average — and with Syscoin blocks running at 10mb that means the network would need to see approximately 14.4 million offers per day in order to fill blocks and incentivize the actors supporting the marketplace.

Even if this level of use was achieved, the scalability/sustainability on the current architecture would be shortly-lived and the fees would then be so high as a consequence that the price advantage of using a decentralized system over traditional centralized systems such as eBay or Amazon would almost, if not entirely, be erased.

That equation does not facilitate to the success of the ecosystem and we believe there are better ways of evolving Syscoin’s value proposition which would promote ecosystem growth while empowering superior transaction speeds and scalability.

The key takeaway here is that the footprint of the blockchain consensus code and storage should be kept as minimal and efficient as possible. Only double-spend protected structures should be stored and transacted on a 1-to-1 basis. Essentially, this refers to anything involving monetary transactions moving ownership.

We’ve performed extensive research — including ways to aggregate and deliver on similar security models while also providing the scalability needed for real world mass adoption. These aggregation algorithms were innovated in part by the work done by our team participating in partnership with Microsoft’s Decentralized Identity Foundation initiative.

The concepts learned there can be applied to a number of scalable distributed applications at millions of transactions per second — with little to no on-boarding costs in terms of price paid in SYS fees and time. It is as easy as importing an SQL database.

Leveraging the strengths of other blockchains and their respective development communities for certain operations, the fourth iteration of the Syscoin Protocol further defines Syscoin’s value proposition by making the main blockchain a high-throughput transactional layer with support for Assets on top. We then use a pioneering first of its kind zero counterparty “bridge”.

Part of the research was how the team would enable a de-centralised payment network that scales for micro-transactions. This is where Z-DAG came from and is a concurrent design, along with masternodes incentivised for high throughput relaying of transactions.

Other research by Blockchain Foundry included figuring out how to bring EVM (Ethereum Virtual Machine) functionality to Syscoin users. This involved determining whether or not to integrate it natively with Syscoin — or from a different perspective head on, such as Trusted-Execution. There were many considerations, such as inter-opt with current designs, which would let thousands of developers who are on the problem solve it — while leveraging their work.

The latter was chosen for practical reasons — to have it work effectively for cryptocurrencies, developing it could take years and likely change on the part of Intel’s hardware design. This led to innovating a way for BCF to integrate Syscoin directly with Ethereum and indirectly with other blockchains (such as Tron and EOS).

Syscoin and Syscoin Assets will have a 1:1 mapping and footprint through an ERC-20 equivalent contract running on the Ethereum network. It is a two-way peg (2WP) and has been a focal point for the entire industry since Satoshi spoke about SPV in the Bitcoin whitepaper.

This breakthrough by Blockchain Foundry will be the first of its kind, moving from a non-turing complete (Bitcoin based coin) to Ethereum without any middleman or counterparties or even custodians holding funds. The breakthrough provides the business world a new choice — to now allow for efficient micro-transactions to happen, while still leveraging the regulated smart contract governance models developed on Ethereum.

In addition to the security of being backed by the Proof-Of-Work network of Bitcoin, Syscoin 4.0 provides benefits to both ecosystems —

Providing Syscoin users with the enhanced functionality, but also gives Ethereum users the speed and scale benefits of Syscoin.

The new bridge technology is unique in that it allows for Syscoin tokens to exist across other blockchains, which in sum represent the total circulating supply of Syscoin.

While this bridge technology can be used to leverage any blockchain’s turing-complete capabilities, the first direct bridge will be built to the Ethereum chain for smart contract execution.

By providing a bridge to Ethereum, the Syscoin ecosystem can also benefit from all the tooling present in the ETH ecosystem. Platforms such as Metamask, ERC-20 DEXs, MyEtherWallet, Ledger and others can all be used with Syscoin 4.0 via the SYSX ERC-20 token.

From ETH there are existing bridges to Tron/EOS, should users wish to navigate to other chains. It is important to recognise that although these bridges allow Syscoin to leverage the power of other blockchains, it builds no hard dependencies between SYS and these chains.

Syscoin can continue to operate without the bridge and furthermore, additional independent bridges could also be built to other chains.

As an example — rather than moving to Tron through ETH, a bridge could be built directly to Tron (ie: SYS -> TRON rather than SYS -> ETH -> TRON).

Assets can also use this bridge.

As an example — you can use the SYS based asset on the main Syscoin chain for point-of-sale use cases, which are backed by the security of Proof-Of-Work, then subsequently use the bridge to move from SYS to SYSX (an ERC-20 token on Ethereum). The SYSX can then be used to interact with smart contracts on the Ethereum chain, such as a marketplace smart contract that requires SYSX for execution and pays fees back to users as dividends.

Users can then choose to keep their tokens on Ethereum for additional smart contract interactions, or, bridge them back to SYS for the security of the Proof-Of-Work chain. The added stability of PoW will also give store of value attributes to Ethereum users looking to park their money on a network as secure as Bitcoin.

This brings value to Ethereum users just as it does to Syscoin users needing to leverage turing complete applications in their business models. 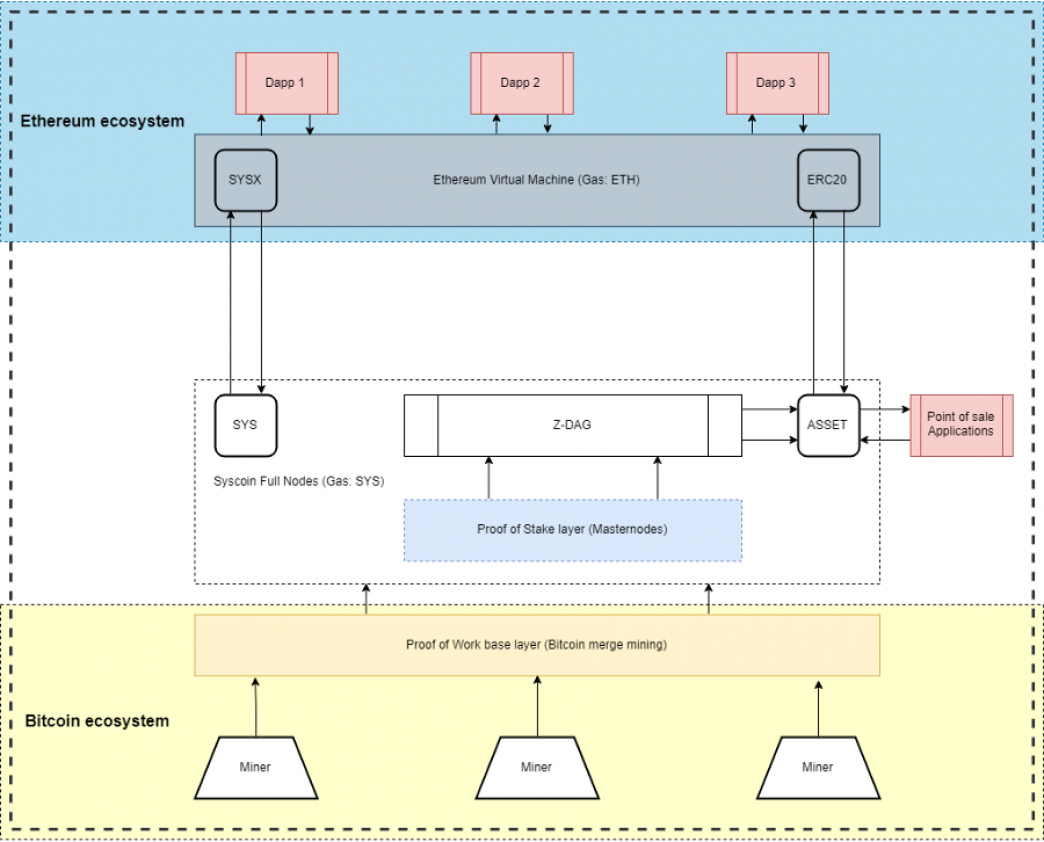 EVM (Smart Layer)
Nodes talk to the EVM which enables interoperability for assets and SYS, with ETH allowing for sophisticated smart contract execution.

Syscoin (Layer 1)
Base currency issued, transacted and secured by Bitcoin mining resources. Syscoin is needed as gas throughout the whole ecosystem.

As part of the migration, we’re also looking to improve and enhance the functionality of the core business components from Syscoin 3; but in ways which provide for improved scalability and incentivization in ways that the Syscoin 3 implementation did not. Below are some early ideas on how the concept of Identity, Marketplace, Escrow and Certificates can evolve and thrive in the environment offered by Syscoin 4.

The identity layer is really the only thing needed to develop decentralized applications (Dapps) that are not consensus critical (essentially 95% of all Dapps in existence). This opens the floodgates of possible use cases across the board.

To name only a few examples, these include:

In the interim, we can build a marketplace with the governance system built from the masternode layer to fund hosting, day-to-day costs and buyer/seller incentive programs. In this way, centralized portals can be stood up with distributed governance and business models to complete the promise of reducing fees and disrupting the eBay/Amazon model — by governing through a blockchain and transacting value through acceptance of cryptocurrency.

The road map here is to quickly enter the market with a marketplace that is a functional, viable alternative to the traditional centralized businesses like Amazon, migrating to a fully decentralized model using plasma and/or through the aggregation approach outlined above in the Identity section.

We envision the end goal being a global e-commerce protocol similar to HTTP, used instead to distribute e-commerce across the new web!

There is a new way to do escrow flows on the latest Bitcoin Core 0.17 that has been inherited with Syscoin Core. It is called PSBT, which essentially does the same thing as our escrow contract but offline.

These are indeed exciting times ahead for the protocol, in the coming weeks we will post more detailed information of specific aspects of Syscoin 4. In the meantime feel free to discuss details with us at our official Discord Server .