This weekly update is compiled by SDMT to bring you the latest Syscoin, SDMT and Blockchain Foundry news. For more information about the Syscoin Platform please visit syscoin.org. 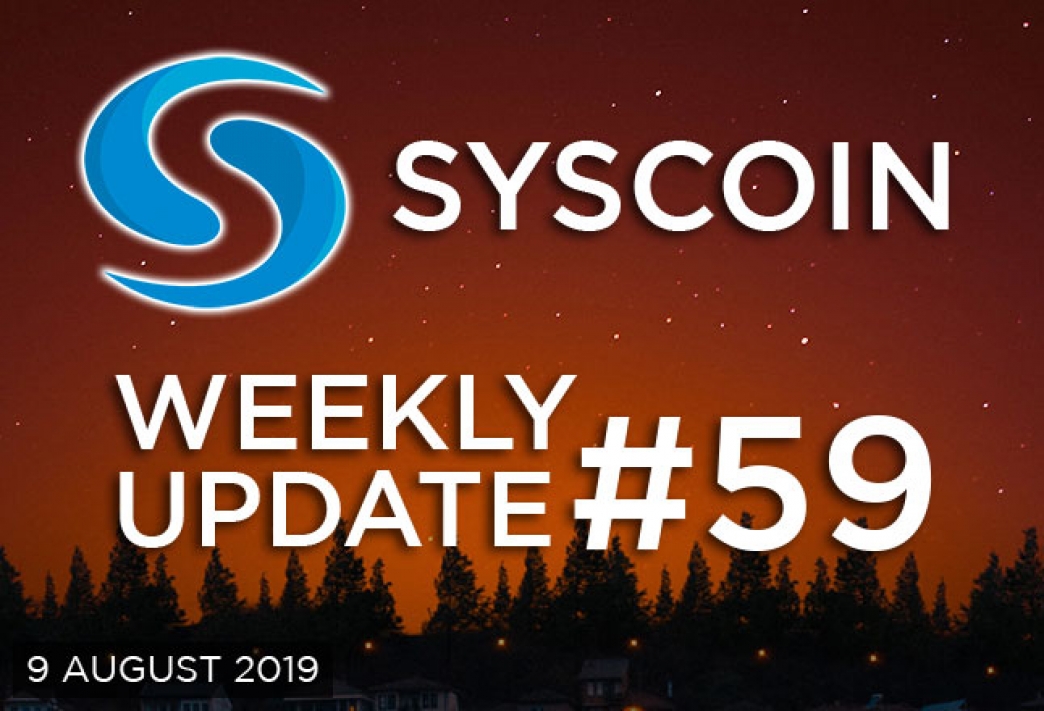 The dev team are making good progress on the bridge and the discoveries made during the bug bounty have played an enormous role in edging us closer to pre-launch lockdown. The main update from the team is that they have introduced a “balance manager contract” which simplifies the process of existing ERC20s crossing the bridge to the Syscoin side.

SDMT have been busy behind the scenes with BlockNorth recently, and we can now announce ‘Block Party Amsterdam’ which will take place on 7th November 2019 in the beautiful city of Amsterdam. This event has a particular focus on the impact of blockchain on supply chain and the precious commodities sector. SDMT members Michiel, Ryan and MCA will be in attendance; reports that Dan Wasyluk from BCF will attend are yet to be confirmed, stay tuned...

Read all about it here

Syscoin Platform & Blocknorth presents Block Party Amsterdam 2019. Join us in one of the worlds most beautiful cities and enjoy an evening of blockchain and cryptocurrency, networking, food, drinks and music!

There have been a couple of great, well-informed articles in the crypto media recently, focusing specifilcally on Syscoin's competition-beating scalability solution, check them out here:

Be In Crypto: The Battle For On-Chain Scalability: Who’s Leading?

Syscoin has been reviewed on the CryptoTube YouTube channel - check it out below!

After many months of excellent service to the Syscoin Foundation, founding member Johnp has stood down to focus more on ad-hoc community and dev support. Replacing him was a difficult task but the Foundation have settled on Australian crypto-burgermeister, BigPoppa. Welcome BP!

After winning a recent Twitter poll, Syscoin has now been listed on the StakeCube platform!

We welcome $sys to https://t.co/UT2R0hdRp3. The coin is listed on the dashboard for staking and on our exchange now. @syscoin

Syscoin has been added to the masternode pooling site, StakingLab

Q: Hi dan, is there a reason to not update the roadmap?
A: So we are still working on a roadmap update, the findings from bounty seekers may impact that thus the lack of update thus far. We also have some client requests at a protocol level that may make their way into this or a next update, we want to include those in a roadmap update as well

Q: Hi dan, is the Ethereum-Bridge and mobile wallet progressing well?
A: Yes both of those are progressing very well. The bounty hunter team has made some good findings which Jag has already mostly implemented fixed for- we'll post a full debrief once he's done and ready. This thing is going to be solid. Mobile wallet is moving along very quickly as well, i dont want to jinx anything but we're a bit ahead of schedule at the moment. I think we will have something awesome soon but i worry a bit on how long it will take to get app store approvals. Will prob just distro via apk and testflight while we wait. I'm very keen on getting zdag in there asap too... first zdag enabled mobile wallet.

Q: Hi Dan! Any wip images for the mobile wallet?
A: Oh i have a whip video but it looks more bad than good atm lol.I mean it's unstyled is all. We have all the mnemonic/bip39 stuff working, we're building in good multilanguage support from the start as well. Kinda important.

Q: Curious as to what the interaction between BCF-SYS-and ETH devs will look like.  Will it be a formal website where stakeholders can rally around or something else?
A: we still have some thinking to do on that, i think something like that would be valuable

For all the official and latest news releases please follow us for all the latest community news via our SDMT Twitter account, as well as hot-off-the-press Syscoin and BCF updates. The Syscoin team will also share our posts via their official social networking channels, to help spread the word.